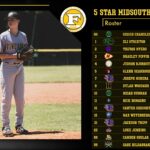 After showcasing a strong fall campaign, this 2024 group is ready to step up once again and make their mark on this upcoming summer season. 2024’s Head Coach Curtis Hoppe is in for a treat as he gets to have fun with the depth across the diamond at every position.

“We are going to have a lot of versatility,” said Hoppe. “All 16 dudes will compete and have a role on this team that will allow us to compete at a very high level.”

That is always the goal, compete at the highest level. This is why when we create our schedules we take that into consideration with every group we have. Out of all the grad classes for the Midsouth, their schedule by far will be one of the best/toughest schedules this group will compete in. It’s going to be a testament nonetheless to not only prove they are one of the top groups in the state but show that they compete against anybody.

“That’s one thing I learned very quickly from the Fall, is they are not going to back down from anybody,” said Coach Hoppe.

That’s going to need to be their mindset too with some of the events this group has the chance to compete in. The PG National Elite Championships, which is an invite-only event showcasing some of the top teams in the southeast. Our favorite event as a staff that we were fortunate to get a bid for is the PBR National Program Invitational that includes a field of only 36 of the best national teams across the country. 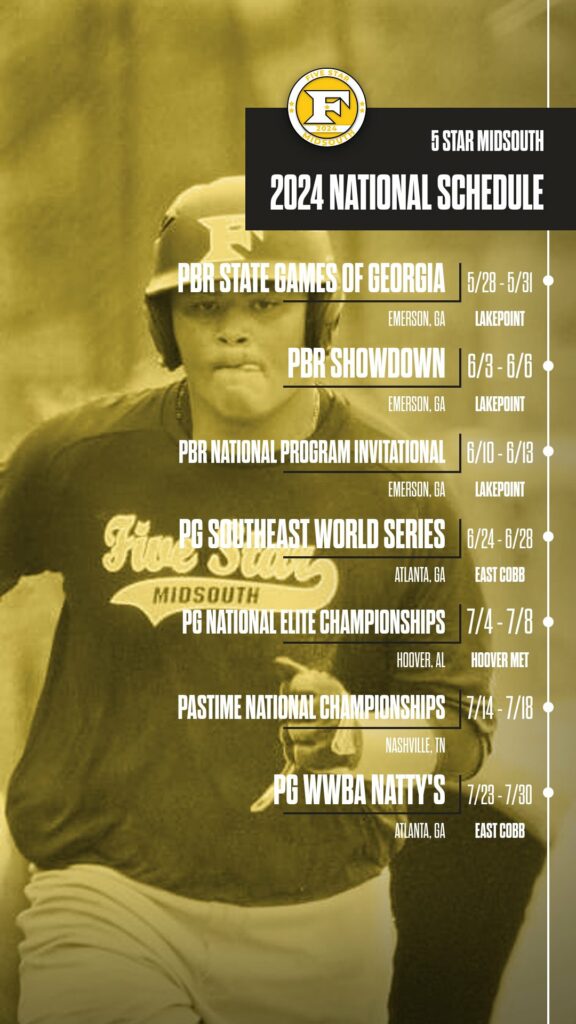 “We will get to show everyone what 5 Star Midsouth is made of,” said OF Gabe Hildabrand from MJCA. “There is a lot of really special talent in this group.”

All of this versatility brings with them the ultimate strength of this group, which is the depth on the mound. Out of the 16 dudes on the roster, 15 of them will have the chance to compete for quality innings. A few who have already competed on the mound on the varsity level this spring season. Micah Summar (Green Hill H.S.) has made his presence known for his high school squad. Winning one of the district games spots as a 9th grader, he has absolutely dealt all spring including 3 CG wins, 2 of which were shutouts, over Wilson Central, Hendersonville, and Beech. The southpaw has really shown his makeup and will be a lot of fun to follow. Elijah Stockton (Friendship Christian) another 9th grader who not only threw on varsity but also held the fort behind the plate this spring season. He already has a “no-hitter” to his resume this Spring, as well as a few CG victories to go with as well. His grit is undeniable, and he is going to do whatever he is asked to do at a very high level.

Bradley Pippin (Riverdale H.S.) is another name to put on your follow list as he also started varsity as both a position guy and pitcher as well. Reports of him being up to 87 MPH on the bump shows you the strength this young man has, while also hitting 2 bombs this spring season. He’s one of the best catchers in the state, and now you mix him with Stockton, and you get one of the best duos behind the plate on a summer circuit together in the area.

Glenn Seabrooks (Davidson Academy) has shown his worth as well on the varsity level. Glenn is a physical monster who has all the strength in the world that allows him to compete at the plate and on the mound. Judson Bjornstad (Franklin Road Christian) another arm that has been one of the better arms in his age group for the last few years now. Was up to 81 MPH earlier this year. He provides a lot of length on the mound to pair with really good off-speed stuff which makes him really effective when he is controlling the zone.

Camden Sholar (Smyrna H.S.) don’t let the hair fool you, the kid has a chance to really succeed when he’s on the rubber. Clocked up to 83 MPH, with a really strong breaking ball to mix in with it, makes Camden lethal when his number is called on to compete on the mound. Carter Gregory (Blackman H.S.) is another arm to remember for this squad. A quarterback for high school who unfortunately missed the summer season last year with us because of an injury. Has now played a full fall & spring season and his arm is living up to expectation. Reports of him clocked up to 86 MPH shows us the freak-strength Carter possesses with his arm. Dylan Woodard (Hendersonville H.S.) is what we call a crafty righty. He is going to fill up the zone, and not be scared to compete against anybody which makes him super effective out of the bullpen when you need to get an out.

Talking about athleticism, Gabe Hildbrand (MJCA), Max Weyenberg (Centennial H.S), Luke Jenkins (Fayette Academy), Nick Romagno (Siegel H.S.), and Jackson Tripp (Blackman H.S.) are all dudes that can impact the game at the plate and on the base paths.

“Our depth on the mound is going to be our huge strength, but people will see we can run the bases better than most teams in our age group,” said Hoppe. “That’s going to be key for us, running the bases really well, with timely hitting.”

Gabe is a left-handed stick who has been clocked at a 6.85 60’ time which makes him havoc when he’s on the bases. He’s been a name to follow for years now, and as he continues to fill out and get stronger, his ability to make contact and do what he does running bases makes him a huge asset for this team as a whole. Max Weyenberg, is a “freak-athlete” who passes the eye test when he steps off the bus. He’s one of the strongest kids in this group, who has gap to gap power across all fields. His big arm is going to showcase and transition well both on the mound and out on the field.

Luke Jenkins, who could be one of the biggest secrets this group has, possesses huge strength and athletic ability. This is a guy back in January who was clocked throwing 85 MPH from the OF while also getting up to 86 MPH on exit velocity at his PBR Showcase. He’s got big-time strength that matches well. Nick Romago, who has had himself quite the spring for Siegel provides more depth in the OF and shows his ability to hit baseballs hard from the left-hand side. This is a guy who in the Fall hit over .400 on the season. His left-handed stick is going to really play well. Jackson Tripp, who also hit over .400 last Fall, comes in as the high-energy guy that can create huge impacts wherever you put him on the field. You need him behind the plate he can do that, go play everywhere in the OF, he can go do that too. His speed and athleticism are going to help this team immensely when the season gets going.

Around the infield is going to be Griggs Chandler (Green Hill H.S.), and Trevan Myers (Sevier County). Griggs is a gamer and understands the game immensely well. He does all the little things right. He is the glue of this team, and his leadership and knowledge are going to help this squad exceptionally as they play in these bigger events. Trevan is the same way. He is going to compete like crazy and do what he has to do to help this team win. Runs and moves well with really strong hands that allow him to alternate off both SS and 2B. Both dudes will do a lot of the patrolling in the middle infield with how well they move laterally.

Unfortunately, we won’t have Joe Morera (Blackman H.S.) this summer season with us as he suffered a season-ending injury. Don’t be mistaken though, the “mighty mustache” will be back and better than ever. He was huge last year for us on the mound and would have provided that same impact once again for us if not for the injury. We hope for a speedy recovery for Joe!

With all of this talent, the expectation is still the same. We are going to be focused, locked in, and ready to roll when 1st pitch is thrown. Doesn’t matter who the team is, we are going to go out and do what we do really well to help us succeed. 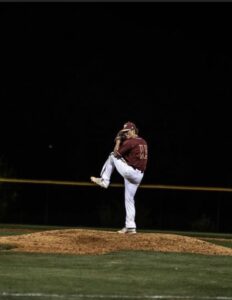 “With little time we had as a group last fall, we built bonds and became brothers,” said Pippin. “School ball is fun but there’s nothing better than traveling across the Southeast with your boys and winning tournaments.”