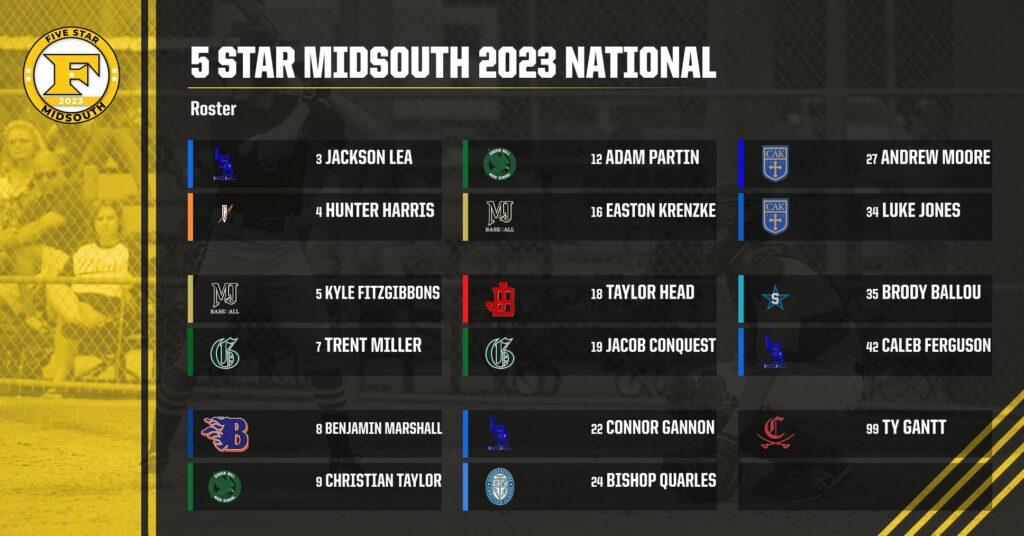 Summer in Atlanta is really nice this time of year. The feeling of essence you get when you step foot at Lakepoint is something I think every baseball player lives for. It’s an unreal experience and something we truly take pride in at every event we play in. You never know when it is going to be your last, but you will always remember those times you played at a place like Lakepoint, East Cobb, or on Vandy’s field. They are memories that will last with you for a lifetime. That’s what this is all about.

Creating an incredible experience for a group of young men, that will build friendships that will last with them forever. So to all that we say thank you to those that allow us to participate in these incredible events. The tip of the cap from the 5 Star Midsouth staff.

Now… onto the good stuff! Our 2023 National group is in for quite the summer ahead of them. Already a roster featuring two dudes committed to D1 schools, we expect big things ahead for this rising group.

“Going to be interesting to watch this team play as a whole,” said Head Coach Josh Taylor. “We have to have the ability to contribute in all aspects of the game if we are going to have a strong showing this summer.”

That is definitely the intriguing part of this group. They have the depth, and the arms to really be one of the top teams in the area. That’s what they are going to rely on, is their ability to step toe for toe with anybody on the mound, and with the depth, they have their ability to play really strong defense no matter who is on the field.

“Defense is going to be the secret sauce,” said Taylor. “We have some top-end arms that are going to be able to keep teams off-balance. We just need to utilize our athleticism defensively to take care of the horses we have going on the mound.”

Speaking of horses, this pitching staff has already seen 5 dudes live in the low 80’s and, some even pushing into the mid 8’s this Spring & last Fall. One of the biggest pieces to the staff is Andrew Moore (CAK) who has lived in the mid 80 marks all Spring. He is a part of one of the deepest staff in the state and was seen pretty regularly throughout the week competing for innings. Even touching up to 88 on the bump. He’s going to be a lot of fun to watch. His teammate Luke Jones (CAK) was in a very similar position as well. 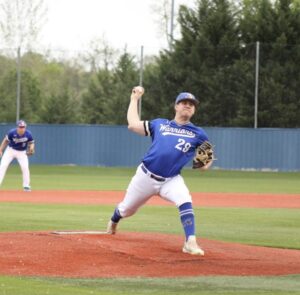 Has been consistent in that low 80 mark getting up into that 85 to 86 range from time to time, he is another really strong kid that is ready to make a huge jump this summer on the travel ball circuit.

Let’s continue the trend for pitchers who are teammates as well as we talk about Trent Miller and Jacob Conquest from (Greenbrier H.S.). Trent has put together a really strong Spring for the Bobcats. Living in the 82-84 range up to 87 this Spring. The physical body Trent possesses shows there is a lot more in the tank for this young man. Jacob may not possess the body Trent has, but he’s got a lot of strength and athleticism that really competes well for him on the mound. He was a guy that was 82-85 this Fall touching 86. He’s working himself back from an injury, but he should be able to compete for really strong quality innings by June.

Hunter Harris (Ensworth) is another freak-athlete that who can play anywhere in the outfield. Hunter really has a strong arm, that’s his huge strength. He was a guy earlier this year up to 86 from the OF and 84 on the mound back in the Fall. He is continuing to put in the work, and he is going to be one of the biggest sleepers we believe in.

Caleb Ferguson (Lebanon H.S.) is another arm on the mound this group will rely on. A guy who came on late last summer, unfortunately, had an injury in the Fall that kept him out most of Spring. He’s in for a long summer season as he has recently increased his workload on the mound.

Let’s get to the offensive standpoint and talk about the fellas who will be doing the bulk of the duties behind the plate. Adam Partin (Green Hill H.S.), Kyle Fitzgibbons (Mount Juliet H.S.), and Ty Gantt (Cookeville H.S.). All have the ability to catch at a very high level. Adam both offensively and defensively is a trendsetter for this group. He’s been in the middle of the lineup all year for his high school and was a guy this past fall that hit over .400. He just finds ways to get on base, and with his leadership behind the plate, he is one of the best catchers without a doubt in the state. 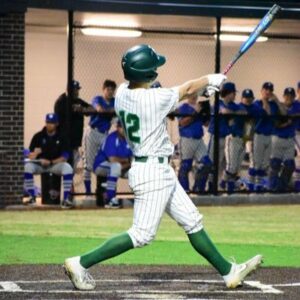 “I feel our team is going to do very well and compete deep into the tournaments,” said Partin. “We want to compete against the best teams.”

Kyle is an extremely athletic catcher who can also play quite a bit of outfield. He runs well and will utilize his athleticism wherever he is asked to do so. He could be one of the strongest kids on this team, so it’s going to be exciting to watch his development unfold. Ty is built like a brick house. Don’t be mistaken though, this guy moves well for his size. His ability to find the barrel and the ability to hit it out of the park is going to be a huge difference-maker for this team.

Around the infield, we have Christian Taylor (Green Hill H.S.), Taylor Head (Jo Byrns H.S.), Jackson Lea (Lebanon H.S.), Connor Gannon (Lebanon H.S.), and Easton Krenzke (Mount Juliet H.S.). Christian, is an (MTSU commit) and is the first commit inside this really talented 2023 class. He is one of the best middle infielders in the state respectfully. He’s as clean with the glove as anyone we have seen no matter the class you are in. His ability to run, 6.87 | 60’ time allows him to be an extra-base hit machine. He’s a ton of fun to watch, and we are proud the hard work he continues to put in continues to get noticed on a national level.

“We will be one of the higher caliber teams this summer,” said Taylor. “Every tournament we play in, we expect to be able to hang with the best of them, and find ways to win.”

Taylor Head is Mr.Fundamental in our eyes. He is really versatile as he can play anywhere on the infield. He’s really put in the work this off-season and is getting much stronger as he has two home runs on the year for his high school club. We also expect him to have a lot of mound time for this group this summer. Jackson Lea does all the little things right for this team. The middle infielder runs well, and always finds ways to get on-base. He’s an OBP machine with his ability to work counts and set the tone with his discipline at the plate.

His teammate for his high school, Connor Gannon, is a very physical-looking kid. His ability to hit baseballs is what sets him apart as he utilizes much of that strength he has to barrel balls up. He can play both corner positions and will be able to do so all summer long. Easton Krenzke, aka “Mr.Bunt,” is a true teammate for the guys on this team. He provides a ton of energy for the team, and it reflects that top to bottom with the group of players we have. He’s also a bunting guru we think because it does not matter who’s on base, or the count he is in, his ability to get on-base with the bunt game is a huge difference-maker especially for what this team hopes to accomplish. 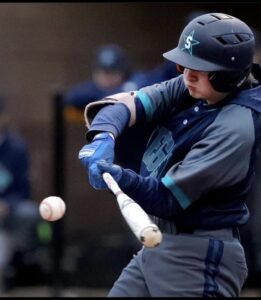 Patrolling the bulk of the outfield comes pure athleticism in Bishop Quarles (Goodpasture Christian), Brody Ballou (Siegel H.S.), and Ben Marshall (Blackman H.S.). Bishop, who is the youngest on the team, is a 2024 commit and the first 2024 commit to being committed in the class as he is committed to Ohio State. He’s one of the top players in the class and is being recognized on a national level with his showings he had this Fall and Winter. The smooth-moving OF is going to be a lot of fun to watch, as he is a true difference-maker for this team both offensively and defensively. Brody is another smooth-moving lefty who can play anywhere in the outfield. He can impact similarly like Bishop, both offensively and defensively for this team. He has shown just that this spring as he’s been in the starting outfield in just about every single game this season for Siegel. Ben, is another freak athlete who is the starting TE currently on the Blackman football team. He runs well for his huge size, which allows him to be another XBH monster in the summer season. He will look to make a big splash for the team.

A lot to really like for this group. They have the depth to make runs in big events both on the offensive side and on the mound. It’s a talented group, and we expect nothing less from them when it comes to competing and wanting to play against the best.

“We are going to see a lot of colleges wanting to come and watch these guys,” said Coach Taylor. “They all have a ton to contribute, which will make this summer really fun for these guys when their number is called.”