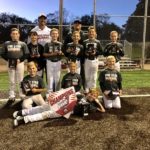 5 Star Vols 10U Anderson put the fear in Halloween as they roll through the competition in the Game7 Halloween Havoc event taking home the trophy! Going a ridiculous 4-1 on the weekend frame, Anderson’s group was hungry all weekend with the production they were able to create. Averaging close to 10 runs a game, the offense was alive and well and continued into the championship game as they contributed to 13 hits on the day. One hit was bigger than some others. Wyatt Haden came up with the walk-off single to allow the Vols to take home the title. Job well done by all the players! More to come as Spring is right around the corner.