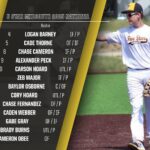 The young bucks in the 8th-grade class step up to the plate first in this team preview. A group built on guys who are going to bust their tails day in and day out. These guys are going to continue to thrive to become the very best versions of themselves.

“Our goal for the season is to have these guys prepared,” said 2025 head coach Tyler Maskill. “We are going to do our very best to advance them both physically and mentally. We want the head coach of their rising high school team to be amazed at their baseball IQ first as physical maturity will come as they grow older.”

That’s always the challenge when it comes to this age group, is understanding that there will be growing pains as they continue to mature over time. Nonetheless, this group is ready to make an impact early and often as the season is right around the corner.

This team is built around 13 players in all, with 12 out of the 13 all having the chance to step foot on the mound and make an impact right away. Expect huge innings from Logan Barney (Mount Juliet MS) and Chase Fernandez (Stewarts Creek MS) as both have been in the upper 70’s all spring long. Both guys showing their strength & pitchability to beat anybody. They are a nice duo to pair with Zeb Major (Tuckers Crossroads) who is your crafty lefty who can come in any spot you need him to be for this pitching staff as a whole. Let’s just call him the “glue” for the staff.

Controlling the staff behind the plate this summer season is going to belong to none other than Baylor Osborne (West Wilson MS). His ability to control the game for his guys on the bump will continue to be a huge asset for this team to succeed.

“I feel like we got a great group of young guys that can do some damage,” said Osborne. “People are going to remember what we are all about when they play us. We want everyone to fear us.”

Around the infield, we have Alexander Peck (USN) who is as athletic as anyone we have seen play middle infield. Which did not go unnoticed this Spring season when he officially got the call up to play varsity baseball on the high school team. He gets paired with the “super-twins”, in Cory & Carson Hoard (Grassland MS) who are your utility men around the field. Wherever you need them, they will go and compete in any spot for you.

Every team has to have their grinders. Pair Cade Thorne (Winfree Bryant MS) & Gabe Gray (Mount Juliet MS) together and you get just that. Both dudes are selfless, hard-nosed, and willing to do the dirty work to help the team succeed.

“Those are going to be two dudes that every coach loves to have,” said H.S. Director Matt Cohick. “They will get hit by pitches, they will work counts, they’ll do all the dirty work while staying locked-in no matter where they are in the game for their team.”

Offensively, all of these dudes are going to make huge impacts as the offense is a huge strength for this team as a whole. However, Caden Webber (Gladeville MS), Brady Burns (Eagleville), Chase Cameron (Henry County), and Cameron Obee (Ensworth) are going to be the main run-producers for this squad this season.

Caden Webber is a walking RBI machine and proved that all Fall as he finished 2nd in RBI’s on the campaign. It felt like he came up with the big hit when needed during the Fall. He’s a guy who is not afraid of the moment that’s for sure. Brady Burns just finds a barrel every time he steps in the box. As coaches, we know even if the numbers may not show in the box score, a QAB is more often than not shown when Brady Burns’ name appears.

Chase Cameron is probably the biggest secret on this team. Big strong left-handed stick who has already parked a bomb on this Spring season this middle school. The lefty stick is legit, and he’s in line to be a huge run-producer for the mafia. Cameron Obee, (brother to Devin Obee, recent Duke commit), may not look like it with his huge physical stature, but he’s the youngest on this group as he’s still a 2026 grad. He sure doesn’t play like a 7th grader though as he put together one of the more impressive Falls from a swinging standpoint.

The 2025 group is well-assembled to make a huge run in every event they play in with the versatility and depth they have at each position on the field. Their tournament schedule is no joke as they play all the way down into Hoover, AL in the WWBA National Championships, all the way up to Westfield, IN to play against some of the best teams in the Midwest at Grand Park. They are definitely ready for the challenge as they are biting at the bits to get this season rolling. 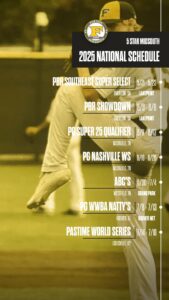 “I already have players asking me what they can do to take their game to the next level,” said Coach Tyler Maskill. “I expect a lot of growth from this summer, we will continue to grow within the game, and you never know maybe even bring back some hardware to 5 Star along with it.”